You might know this about me, but I do not have a knack for making anything pretty.  Whether that means home decorating, presenting an attractive meal, or creating content for my business.  If it looks presentable, it means I’ve put countless hours into making it so.  And not pleasant ones.

Depending on who might be coming to our home, I might begin to have heart palpitations several weeks beforehand.  Generally speaking, we are not the best housekeepers so the fear of someone finding a part of my home that’s not been sprayed or wiped causes me anxiety.

I recently considered more deeply what it is about “making anything pretty” that causes me to sometimes lose sleep for weeks at a time.  Some of it is the aggravation I’ve felt about the expectation that, as a woman, I should possess the pretty-making ability, but it’s never materialized. The aggravation is heightened when coupled with a memory of something my mother said to me long ago.

In my early twenties, possibly around the time I had lived in an apartment for college, my mother mocked my abilities at keeping a home.  The details surrounding this comment are fuzzy, which is how our memories work.  It’s a confluence of a number of vague pieces.  So vague that I’m foggy about the when and where or why of what she said.  But her voice rings through clear as day when I think of this.

She said, “Well, Chris, you’ll never be a domestic.”

Which I took to be an insult.

My mother had an amazing sense of humor and whatever comedic timing I have is due to her influence.  This comment wasn’t followed by a chuckle or a subtle smirk.  She meant business and it’s one of those things I’ve played over many times.  Especially while fighting with the vacuum cleaner or a pesky stain.

Keeping a home was very important to my mother when my siblings and I were young.  As I drown in keeping up with the dishes, wiping a table, preparing meals, stepping over a million toys all over the house, sometimes my mind wanders back to my childhood in the 1970s.  The smell of Spic N’ Span and the sound of a mop being squeezed into a bucket were so familiar.

Our house was very clean and I’d have to think long and hard about whether I remember seeing anything out of order.  My mother took very good care of everything.  She didn’t work outside the home until my later elementary school years when the stability of our family began to crumble.

While I have been a passable housekeeper as an adult, the constant drum beat in my mind is “please, God, why do I have to do this?” I’m terrible about articulating the ins-and-outs of how I feel about “feminism” – it’s in quotes because I’m also terrible about aligning myself with causes or movements, so much so that I often don’t know what “feminism” means to me – but I often ask myself why keeping a home is something that women put a premium on.  And I hate to admit that sometimes it gets me downright angry.  Which also does not incentivize me to clean.  Just the opposite.

Perhaps this is where anxiety comes in for me.  Not being “a domestic” has caused me to feel inferior at times to other women and perhaps, less valuable to my mother. I’ve often wondered what she would make of how I’ve configured my life to work weird hours and take care of a child. She had strong feelings about people who raised their kids like we are raising our son. (She’s been gone for over twenty years so before you call her for a comment, the call will be a very long-distance one.) Before you roll your eyes at the melodrama, in my own therapy and in therapy with my own clients, you’d be surprised how much a small comment by important people in our lives can leave a lifetime mark.

The comment popped into my head recently when our preschool-age child helped me bake a cake for my husband’s birthday.  Our son is at an age where he is eager to help and we had a great time planning a Covid-safe birthday, just for the three of us. He and I went to Walmart together and picked out some fun plates for cake, a matching banner, and wrapping paper.  We also bought a few items to decorate the cake.

Most people say that they raise their children differently than they were raised.  One of the ways I do is an unconditional acceptance of his self-expression, as long as it’s not harming anyone.  Someday, I’m certain we may not always agree about how “unconditional” my acceptance is, but for now, I allowed him to help mix the ingredients and, when it was cooled, put icing on the cake.

The “domestic” nag started coming in when it was time for the frosting.  Because here I was, a nearly 49 year-old woman, feeling inept at The Domestic Arts because crumbs from the cake had crept into the icing.

Not a big deal, right?  My mother never, EVER, had crumbs in her icing.  Even if she used cake mixes, her cakes were always perfection.

In that moment, I rolled with it.  Let my son see that his mom makes delicious messes and that she lets him decorate the cake in whatever way he sees fit. The so-called Domestic Arts are not duties I have any talent at!

Below is the finished product: 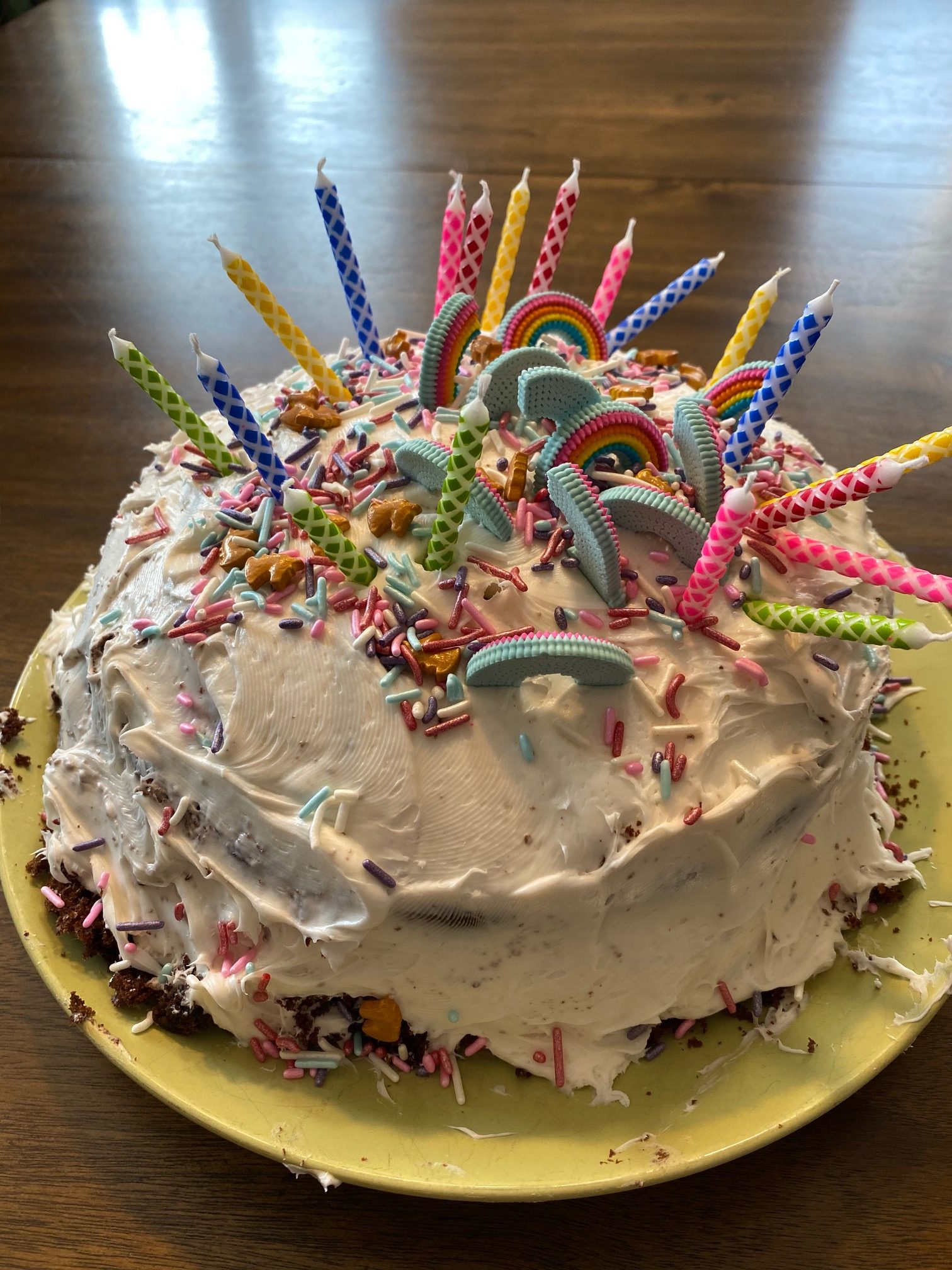 Our son was so proud of himself and I am proud of myself, too, for working to change up the trajectory of expectations.  Our son is not growing up in a home where his mom is saddled with all of the work that’s traditionally been done by women.  I mean, what century are we in?  And even while I struggle that other people’s houses are prettier or cleaner than mine, I want him to know how little those things truly matter.  He also knows that it’s not a big deal to make a mess and that creativity is something that his mom and dad both value above most other things.

I’ve been hanging on to this blog post for about two weeks.  I’ve had some semblance of performance anxiety posting to my blog for the first time in over two years.  But when I woke up this morning and learned that it’s International Women’s Day, I thought posting about my aggravation with housework would be really appropriate today.

Do I also sort of give these international-days-of-whatever a little stink-eye?  Of course!  If you know me, you know I’m a little contrarian about most things.  Especially when it comes to bandwagons.  Seriously, how much “progress” for women is made by the local classic rock station (which Sam and I endlessly mock) playing “Girls Just Want to Have Fun” this morning?  Are we to expect all the Joeys and Tonys and Jimmys going to work at the construction site to form a kick line?

I guess the point of all of this babbling is to out myself about how terrible of a homemaker I am.  And to get comfortable with the reality that, nope, I’ll never be a domestic.  And that’s OK.