Sometimes the right song pops up on a playlist just when you need to hear it.  For me today, that song is a simple, unsophisticated ballad by Bryan Adams from over 30 years ago, when I was a plump, book-wormy, sixth-grade girl who took every opportunity to kneel down on the cranberry wall-to-wall carpeting in the family room in front of the Kenmore stereo, tethered by enormous headphones.

My father came home one evening carrying a copy of Bryan Adams’ “Cuts Like a Knife” album.  Yes.  A record.  A round disc, about 12 inches in diameter, with grooves in it where a needle is placed and sound comes out as it revolves on a turntable.  It was a borrowed copy, but I never knew how he came to get it.  My dad often visited the library on Mondays and Thursday evenings, when they were open late, and usually returned with armloads of historical tomes that would make good doorstops.  Only on rare occasions would he come home with records and this might have been one of those times.  I also was never sure why he brought home this particular album.  I owned a few albums by Rick Springfield and Pat Benatar and even though I had seen a few Bryan Adams videos on MTV (I remember one of them involved Bryan Adams cutting an apple with a paring knife and then a girl dove into a swimming pool without water), I was not particularly drawn into his music.  (By the time the “Reckless” album came out a couple of years later…when I was, ahem, beginning to mature, Bryan Adams became a bigger deal for me.  But that’s probably a completely other story.) 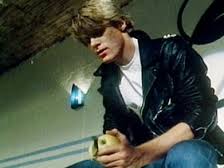 The last track on the “Cuts Like a Knife” album is a short, three-minute ballad called “The Best Was Yet to Come”.  A couple of chords are sustained on a keyboard and the vocals come right in.  Bryan sings (after “Summer of ‘69”, when I fell in love with his raspy voice and rugged Canadianism, I decided we could be on a first-name basis) the first verse:

Just a small-town girl in the city lights

The best was yet to come

The best was yet to come.

Most adults refer to their childhoods as hard.  Reasonably successful or attractive people tell massive sob stories about being tormented by pimples or boredom or their 17-mile walk both ways uphill to go to school.  My upbringing was nowhere near perfect.  Like most normal folks, there were family issues, occasional money woes, and sure, as an adult, I’ve needed the assistance of a therapist to resolve some issues.  I was fortunate that I can count on one hand the times I had been taunted by neighborhood kids (a pack of them once gathered in someone’s yard and chanted together “Ew!  It’s Christine!” over and over as I walked down the street) and by a classmate I had a crush on who called me “Tank”.

Even though these slights were minor compared to those of others, I still felt like an oddball.  I loved to read and was often ashamed that I also carried armloads of books home from the library.  Going to the library was one of the bonding experiences I shared with my dad.  One time in the car, I good-naturedly mocked him for having a biography of Winston Churchill and, in a tone I can hear as if it were yesterday, he mocked me right back, “You got Queen Victoria!”  I didn’t feel comfortable revealing my sick obsession with books until I was an adult.

I believe that my reading habits were partially responsible for developing ideas of how my future would look, but television also played a major role.  We watched a fair amount of cartoons as kids, but my parents were not necessarily child-friendly kind of parents.  We watched shows that adults in the 70s were watching, like All in the Family, Odd Couple re-runs, Mary Tyler Moore, Bob Newhart Show.  As time went by, fantasies about my future developed into a lifelong desire to leave my birthplace.  A desire to bust out of there.  To be like Mary Richards and live in a tidy apartment with a big C on the wall (I bought one a few years ago) and be a strong professional woman.  Doing what, I never really knew…but I had to just pack up and get to where the action was.  To live where I could see sparkling lights at night and hear trains hustling people around and feel the rush of the daily grind.  My mind was full of images of the life I wanted…The outdoor scenes of Times Square and Central Park from The Odd Couple;  Mary Tyler Moore stopping in the middle of a bustling Minneapolis intersection to whip her hat skyward;  the swell of “How Deep Is Your Love” at the end of Saturday Night Fever as scenes of Manhattan at sunrise fill the screen.

So as a dreamy young girl, this Bryan Adams song was like a gift.  It spoke of city lights and loneliness, things I both yearned for and experienced, respectively.  It fostered in me a sense of “yeah, I’m gonna make it” and “I can do anything I put my mind to” – sentiments that were not expressed by my parents, but that I called upon deep inside myself.  Self-doubt has often traveled with me, but somehow, the big picture of watching home get smaller from the rear-view mirror was always the goal.  Packing a U-Haul and towing my car behind it for five hours to get to Pittsburgh the summer I turned twenty-one was a really nutso thing to do, but it got me away from where I felt like I never truly belonged.  Twists and turns accompanied me along every journey and between home and the handful of cities I’ve called home these last twenty-odd years.

Sitting still has always been difficult for me, especially mentally and emotionally, and I don’t tolerate stagnancy or passivity in myself or others very well.  I’m sensitive to the most miniscule alteration in my emotional barometer and in those closest to me.  How can I improve?  What is lacking in me?  Am I using my energies in the best way possible?  Maybe it’s yet another birthday on the horizon or it’s the spring showers affecting me.  Being in this space right now and hearing this song are like being tapped on the shoulder.  Hey, the shoulder tapper says, don’t forget about that small-town girl in the city lights.  It sounds so idiotic, but it reminds me to consider where I’m at and that deep down, I’m proud of where I come from.  I’m pretty happy in this part of the world, but maybe it’s time to address the feeling of pushing an ever-enlarging rock up a hill on a regular basis in some areas of my life.

On an unrelated note, and to put this post to bed…Two summers ago, my beau and I took the train to Montreal for vacation.  On the trip home, we noticed two men traveling together, one of whom strongly resembled Bryan Adams.  It made no logical sense for someone of Bryan’s ilk traveling in steerage with the rest of us, but we chuckled between ourselves about Bryan Adams sitting a few rows ahead of us during the 12-hour ride and it still comes up on occasion.  Let’s imagine it really was Bryan Adams and I told him how much that song meant.  He would have thought me a complete Froot Loop.  Which isn’t far from the truth, I guess.