What is it about us that we are often looking ahead?  I don’t necessarily mean that in a “preparedness” sort of way.  We can look back at any number of destructive weather patterns many of us have experienced to see that we all live at different degrees of readiness.

What I mean is that, why can’t we be happy in the now?  Why must we always be looking ahead?

Can we possibly be happy with here and now?

As a participant in social media, I’ve noticed (and heck, I’m guilty of it from time-to-time) that folks seem to get easily riled up about what’s coming next.

There seem to be two camps of people:  those who truly look forward to the next season and those who simply cannot cope with the fact that it’s out there.  The latter are the people who practically get the vapors when the first Christmas commercial airs (OK, in fairness, I did post a status about seeing the first Christmas commercial last year on Labor Day.).  It’s not only about Christmas.  The vapors can strike individuals under a variety of conditions:  the first time they need to scrape their windshields, when they first turn on the air conditioner, the second they see an advertisement for a pumpkin spice latte during the summer, the moment they see bathing suits hanging in Target in January, and so on.

It seems that so many people are aggravated by seeing Christmas decorations in August or school supplies even before the kiddos have gotten out for summer break, but from the retailer’s perspective, I imagine the stuff wouldn’t be out unless consumers were buying it.  I would also guess that for the people who work in retail, they spend summers putting together all the Christmas displays.  Working as a church musician isn’t much different;  Advent and Christmas plans are in progress by August.

I’ve noticed the holiday merchandise in the stores more this year because I spent more time than usual shopping for craft supplies for our recent wedding.  It doesn’t bother me too much. As someone who shops almost exclusively in Target, I know exactly which areas of the store have the seasonal merchandise so if I don’t need a light-up reindeer in August, I simply turn down the next aisle.

I’m also not much of a decorator.  I don’t fancy the set-up and take-down of decorations nor am I particularly diligent about dusting.  Plus, storing decorations in an already cramped apartment can be an issue.  But a few weeks ago, in early August, Sam and I were in a grocery store and noticed that the fall decorations were out.  Initially, we said, “wow…fall stuff” and had no other feelings about it.  My eyes settled on a silly looking ceramic turkey/votive candle combo that I had to have.  That and a bag of candy corn.   More than anything, I didn’t want to lose the opportunity to have that turkey.  We got home and put it on top of the piano as if it were full-on October.  I love the thing.  It’s adorable and it makes me smile, even though my ideal world would be basking in the sun in 90-degree weather every day of the year.  I don’t like the cold too much, but I love that little turkey. 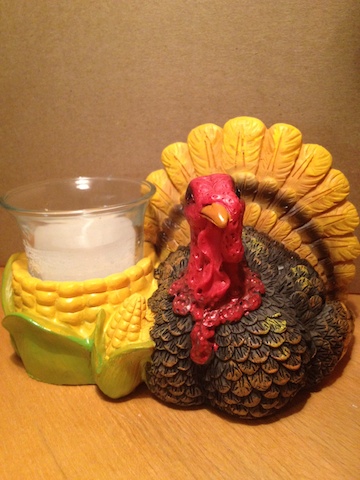 Surely there are people who are merely observing when they say, “wow…fall stuff”, but there are some downright nutso people who are exclamation-pointing all over the place that there is a light-up reindeer!  In Target!  On August 30th!!!!!  [Insert various peeved-looking emoji here.]

It’s kind of too much, all the exclamation pointing.  Here’s an idea.  Tomorrow is Labor Day.  Yes, school goes back in a few days for many people and things get back to its autumnal pace.  Probably in a month, we’ll need a little jacket.  But we have tomorrow.  Let’s just enjoy that day and not jump the gun.  We don’t need to rush out and buy a pumpkin spice latte even though Starbucks has PSL embossed on signs all over their establishment.  We don’t need Christmas wrap or snow boots.  Let’s just enjoy where we are, what we have, with the people we have around us, or with the books we have or the animals we have or whatever. Let’s pull back on the reins of always jumping the gun.  Let’s just be.